I am pleased that we have had a Show this year, we weren’t sure at one stage, should we, shouldn’t we! The preparation for the Show starts January/February time when a few of us get together to go through the previous years’ schedule and look at what went well, what needed tweaking and recipe changes etc.  It was still touch and go as to whether we would have a Show with Covid still very much with us and watching to see what Government guidelines would allow us to do.  We watched and waited and by the end of March decided that we would go ahead and start organising.  The schedules were sent out and the preparations began. Up until ten days before the Show we were undecided as to whether we should hold refreshments this year, we decided to go ahead. The enjoyment of attending and capturing the atmosphere of the Show is enhanced when you have a cup of tea and delicious treat in front of you and you can watch others do the same. Talking of treats, we have had a substantial contribution from so many of you who have baked for us, thank you very much, we are so grateful.

This year was our 43rd Show, in fact it should have been our 44th Show had we not cancelled in 2020 due to Covid 19.  In all the years of presenting Allotments Shows, this was the first time ever we had to withdraw.  Unprecedented times!  We expected there to be caution in many people mixing again, we were very pleased and surprised to see that our entry figures were better than we had thought.  There were 550 entries between 70 entrants in our 133 classes, that was pretty average when comparing previous years’ figures.  And that’s not all, we had 3 record breakers in the Mammoth Vegetable classes too, a leek, potato and runner bean.  Now I like to look at numbers and compare previous years entries especially as I was convinced that we did not have as much on display this year as 2019.  How wrong I was!   The Vegetable section was only down by 3, the Mammoth down by 5, the Walter Woodcock tray down by 1 and the Floral down by 3.  The Mammoth Pumpkin was up by 1 and the Novelty classes were up by 7.  Now all the rest of the entries for each class equalled exactly the same, that’s 12 out of 18 of the groups, fascinating to some perhaps!!!  We move on….

It would not be right for me not to mention a much-loved member of our Allotment family, Graham Whybrow, and what an impact his death has had on us all, not to mention Sue, Becky and family.  We do miss him especially on an occasion like this when his presence and support was so evident throughout the weekend.  Our President Steve Baker will say a few words shortly.

I like to say thank you to everyone for supporting our Show with your entries and thank you to the committee and many helpers.  Look forward to seeing you next year.

It remains a huge privilege to be the President of the Capel St Mary Allotments Association, and it’s great to be here for the Annual Show again, after a break last year due to the pandemic. Despite that break, it’s another excellent Show, and well done to everyone who has entered. It doesn’t matter whether you have won or not, just by entering you have made the Show what it is, and what it is, is an amazing community event for the village.

In previous years, every year, I stand here, on this stage, and try to think of a new way to congratulate you all for a brilliant effort, and an amazing show, because you always deliver – the Capel Show is always, and has always been, a great show.

However, this year is different, because this year we are missing someone who has been at the very core of the Allotments Association for decades, and so I have been asked to offer a tribute to one of the greatest allotmenteers, Graham Whybrow.

We know that Graham did SO much around the village. Is there anything that Graham wasn’t involved in? Events in this Hall, the flowers in the precinct, the original planting scheme over the road, and of course what is now the legendary Capel Bonfire Night.

Many, many, thoughts and condolences flooded in when Graham first passed, and I recall one person saying “we are going to need 5 men to cover all the things he did, many of which the village didn’t know he did!”

But Graham’s passion was his allotment, and the Allotments Association, which – as I’ve just mentioned - provided the means to do so much for the village. Who can forget the wheelbarrow rides at the Capel Fun Day? Well – I probably need to for one!  [Took me days to recover!]

His work for the Allotments Association was second to none. He was a committee member for, what, nearly 40 years? More? Though I’m not sure he ever really enjoyed meetings – hence the introduction of cheese, chutney, and beer to the Executive Committee meetings!  Apart from running the stores at The Hut, which were immensely successful, he was deeply involved in site maintenance, machinery, and new initiatives such as the poly tunnel and wild areas.  His horticultural knowledge was amazing, and he turned his hand to everything, even to catering at the Annual AGM and BBQs!

In short, I can’t think of any aspect of Allotments life that he wasn’t involved in.

And then there was the Show! The Annual Flower and Produce Show, an event that Graham was integral to, a fundamental part of, in so many ways.  He was always willing, and excuse the pun, to ‘grow’ the Show.  A new category, a new stall, a new idea. Graham was always ready to give it a go. I’m fairly sure it was he who acquired this bunting, which is now a permanent fixture, but took some folk a little aback when it first appeared! Graham always wanted the Show to look its best, something to be proud of; I can see him now wandering the Hall, tweaking here, brushing there, helping to make sure everything looked its best.

But why? Why did he want new ideas, new things? Because he was driven by a desire to make it better for everyone else, as simple as that. Quite simply, Graham was driven by wanting to make it better for everyone else, the Show, the Hut, our village…. And yet he never wanted the limelight, just some quiet recognition was enough. He preferred to leave making speeches, like this, to pillocks like me!

Now, there are some posters around the Hall, which you may have noticed. The family are determined to raise enough money for a defibrillator for the Allotment Site, in Graham’s memory. As you can see, £4518 has already been raised, which I know that Sue, Becky and the family are hugely grateful for, but further donations are still welcome, and the details are on the posters.

In closing, I sense that at this point Graham is saying to me ‘Ok Mate that’s enough, time to get on with the prize giving!’ …. And of course, he’s right, but before I do that, can I invite you all to [Standing Ovation In The Hall]

Graham Whybrow - Much Missed By All Of Us

This year's winner of the prestigious RHS Banksian Medal presented to the person winning the most prize money in the Vegetable, Fruit and Floral classes was Andrew Tokely, and here he is with his haul of trophies from the show 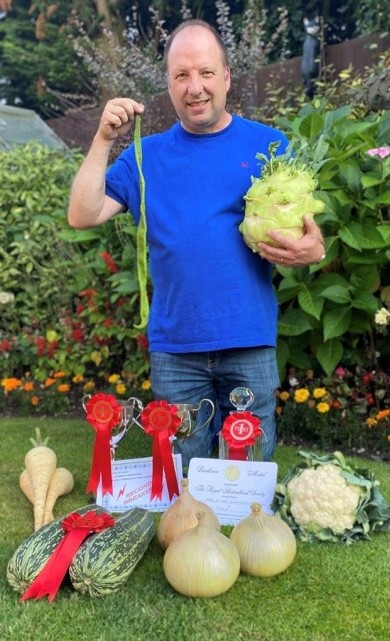 The following resources have been made available for download

Click here for details of the major prize winners

Click here for details of the winners of the individual classes

The winner of the "Name The Teddy" competition was Heather, the teddies name was "Deacon"

The Prize Draw winners were as follows:

Pictures From The Show