Another successful Show is about to close, how time flies.  They say as you get older time appears to go by more quickly.  I think it’s because we try and cram so much more in our lives these days.  Well enough reflecting, let’s talk about this years’ Show.

This is our 42nd Show and thank you to all who entered and supported us.  We British always seem to mention the weather as this does have a big impact on how our produce and gardens grow.  This year we have had an early wet spell which to many of us bought on potato blight across the Allotment site.  The change to lovely sunshine and warmth through July and August has been most enjoyable to most of us.  The dry conditions do mean though that we have to do a lot more watering to ensure our produce and plants remain in tip top condition especially with the very high temperatures.  It appears that as soon as August came to an end, so has the change in the weather with a definite shift to woolly jumper weather!

We have had quite a few new entrants this year as well as the loyal regulars.  There is always uncertainty over the number of entrants and entries we are going to receive and this year we are pleased with our numbers.  We have received 617 entries from 74 entrants, that is 18 entries and 15 entrants down on last year.  When you look at the historical figures these fluctuate from one year to the next.  No two years are ever the same.  So, what has been good and what has been not so good this year as far as entries are concerned?  The Vegetable sections are up by 10, but the mammoth and pumpkins are down by 25, that’s a large number in that category.  The Longest Runner beans have increased by 5 and Capel residents are on par with last year.  The Floral sections and Flower Arrangements are down by 11 entries.  It was pleasing to see an increase in the Family tray, up to 5 entries this year.  The great advantage of the family Tray is that as the name suggests, all members of the family can take part as there is a choice of selecting 3 out of 5 items as well as the compulsory vase of Garden Flowers.  The Novelty classes are fairly equal to last year but the Fruit classes are down by 10.  Cookery is very popular and up by 12, Handicraft is down by 4 but Paintings are up by 5.  The Photography classes yo-yo from one year to another.  In 2017 we had an all-time low on entries of 44.  Last year they improved dramatically to 91 and this year we had 74 entries, down 17 from last year.  Is it our subjects or something else?  Feedback is always welcome.  There were changes to the Children’s section this year and we divided the 2 classes into 3 classes.  It has been difficult to judge a 2/3 year old’s work against a 9 years old in the same class or an 11 year old against a 14/15 year old.  To make judging fairer, those classes were split into Under 6, 6–10 and 11–16 age groups, making Judging much easier.  We were though down 9 entries on last year.

Thank you for entering electronically again with the site opening from 1st August.  This has now become the normal way of entering with only 10 entries this year on paper.  Next year we will not have an open day for paper entries to be delivered to me as only one person appeared on that day this year.  However, paper entries will still need to be posted through my door prior to the closing date.

How many of you noticed our revamped Website?  It is so much easier to navigate.  Don’t forget to look up the photographs which if any of you have any of the Show, these can be sent to us or you can submit them onto our Facebook page.

Now before we present the Results there are a couple of other items to mention.….

We have a new sponsor this year, you may have noticed in the Show Schedule, the Sue Gilson Rose Bowl.  This is donated by Mike Gilson in memory of his wife.  This rose bowl will be presented to the best exhibit in classes 57 & 58, one specimen rose and a vase of 3 roses.  Mike explained that his wife always entered the Rose section of the Show.  Thank-you Mike.

Now, we have a lot of people assist us in running the Show every year and we are very grateful for this.  When we stage our entries on Saturday morning, most of us are just interested in finding out if we have got a 1st, 2nd or 3rd place win, or nothing at all!  Do you ever stop to think about the people who behind the scenes judge for us?  Well here at Capel Allotments we have 10 individual judges who observe, measure, compare, ponder, taste and often struggle to choose when exhibits are of an excellent standard.  One such Judge, Dennis Page has been a regular here at Capel for many years since 1985 when he first came to us.  His Judging career though started in 1975 when he judged for the Suffolk Federation of Horticultural and Village Produce Associations.  All judging service requests then came via post to the Judges homes from County Hall Ipswich.  Things have certainly changed since then!  When Dennis was asked to fill in at Capel by Mr Hurren, it was because another judge was unable to make it.  After that year Dennis judged next in 1991 and from 2004 he became a regular judge in mostly the Floral sections.  He was also an active entrant and over the years and won many prizes for his vegetable exhibits. In 2005 he won the Ronald Tucker prize for the longest runner bean at 691mm / 27¼”. (now the longest runner bean is 739mm / 29 1/8th).   In 2008 he won the mammoth marrow weighing in at 26.23kg / 57lb.13 1/2oz.  (our mammoth marrow record now weighs in at 31.95kg / 70lb 43oz).  There were many other wins over the years.   Dennis worked as a gardener at St Clements hospital for at least 25 years and helped many patients in their recovery to health.  Now at the tender age of 86 Dennis has been a floral and vegetable judge for 44 years, a lot of those years at our Allotment Shows, Garden Club Shows and many other local shows.

Dennis decided to reduce his judging commitments as in his own word, “I’m slower at getting going in the morning,” we all know that feeling!  Dennis is well known for arriving to Judge on his bicycle or moped.  I certainly remember him having his prize cucumber sticking out of his bicycle basket with a cover over the flower end to prevent it dropping off.  To those of you who do not know, you get more points for presentation judging a cucumber if the flower head remains in-situ. It was not just cucumbers he showed but also the longest runner bean, marrows and potatoes mainly.  It has always been a pleasure to see Dennis.  After finishing his judging Dennis would stop to have a cup of tea and a cake and would wonder around the other exhibits and spend time talking to us all. 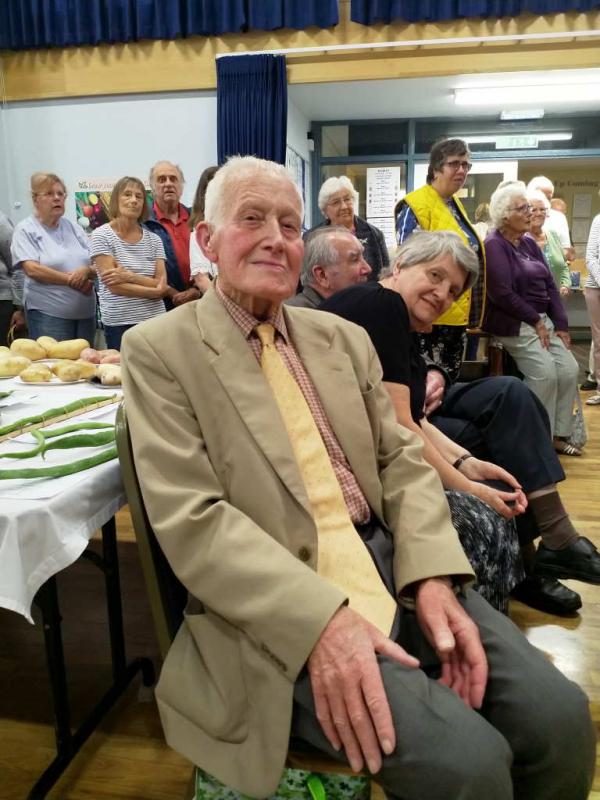 Well Dennis, we would like to say a big thank you for the years of service you have given to Capel Allotments Show.

Thank you all once again for supporting our Show with your entries and thank you to the committee and many helpers.  Look forward to seeing you next year.

This year's winner of the prestigious RHS Banksian Medal presented to the person winning the most prize money in the Vegetable, Fruit and Floral classes was David Page, and here he is receiving his medal from our president Steve Baker 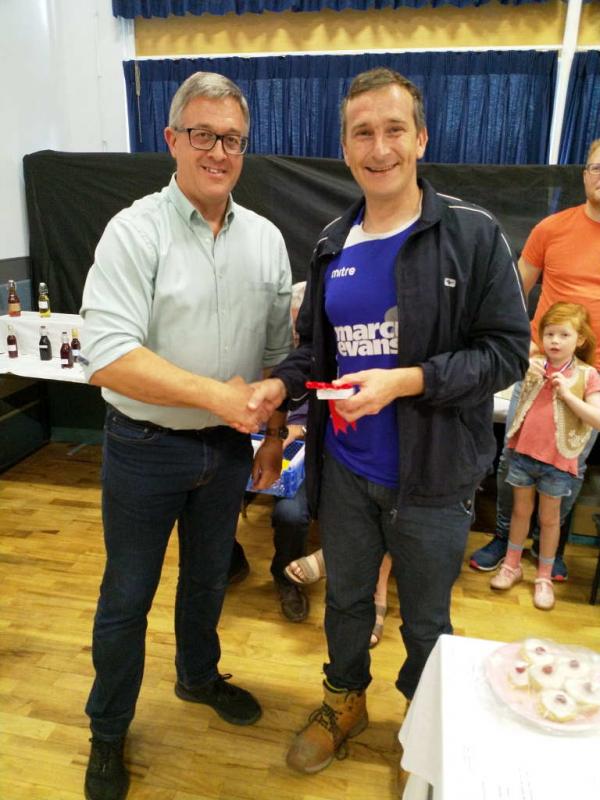 The following resources have been made available for download

Pictures From The Show